So I read Syup by http://maxxbarry.com 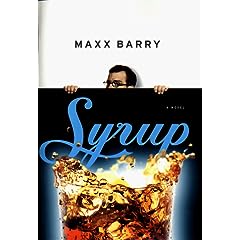 And well basically it's about this guy Scat trying to become rich and famous by developing a new brand of coke. It's more or less of a satire on the US of a whole where the underlying message is "Perception is Reality."

Hell you see a hot chick walking down the streets of NY or LA you automatically assume that it's a hot chick. What you see is what you get is what they say.

Which is more or less true. I mean buying anything from any company that makes more than a 10 million dollars a year from the crap that is sold by them has got to be doing something right.

@_@ I feel hypnotized by major companies, like Coca Cola or Microsoft or... Walmart.

Well anyway it's a really funny and fast read and it's interesting considering how many times this Scat guy ends up homeless.