Haven't done a calculation in a good long while, so I figured something small wouldn't hurt to get back into the flow.

It's back to the Pokemon videogames, except this time I'm not exploring either a certain species or a particular feat by an individual, but rather an entire technique's mechanics.

The most recent description of the move is:

"The user makes the ground under the target erupt with power. It may also lower the target's Sp. Def."

The bolded portion of the statement being the key factor involved. More or less, the technique seems to involve the user triggering an eruption of lava directly beneath the opponent, from magma reservoirs deep underground (though only in the videogames; the anime depicts it as a generic energy burst from the ground). Recently, I came across this article, demonstrating a new minimal depth range for volcanic reservoirs between 2-6 kilometres.

So we have a minimal "height" of the lava flow upwards, but what about width?

I chose to use the torso length of probably the longest non-Legendary user of Earth Power, Camerupt to equate to the width of the lava flow. Not too low-end, not too high-end at the same time. The overall height of a specimen is 1.9 metres. 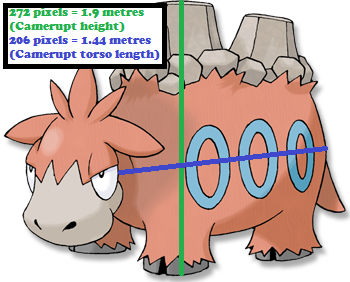 Going to treat the resulting volume as a cylinder: I know it doesn't mesh particularly well with the visuals being not perfectly cylindrical in shape, but I'm sticking with this unless I get a better option pointed out to me.

Volume of a cylinder =

Going to use a low-end and a high-end estimate, with using the minimum and maximum presented factors respectively.

For determining lava density to obtain the necessary mass of matter, I'll be using the density figure of basalt, as it is the igneous rock type most commonly associated with being the by-product of surface magma cooling. So 2800 - 3000 kg/m^3.

As the final result will be a kinetic energy equation, I'll also need a velocity for the lava surge. Going back to the technique sequence of Earth Power, it says that the entire event occurs in a duration of 10 seconds. Assuming that the lava flow travel is taken into account in the pre-visual performance, I'll say that it took 5 seconds (first half of the clip features no lava eruption effect) for the feat to take place. With the 2 km distance, that'll be 400 m/s.

High-end calculation will use the 6 kilometre depth referenced in the National Geographic article and the 3 g/cm^3 density of basalt.

Interesting results. Pretty extensive range of the multi-cityblock busting area before just headbutting the minimum output for town-busting level. Most decently powerful fully evolved, final-stage non-Legendary Pokemon (think Whiscash's 405 ton tremors, Charizard's 7.20 kiloton ice-melter, Ampharos's potentially kiloton-scale illumination, even Gigalith's 305 - 977 kiloton mountain-busting) are roughly within that same broad spectrum of firepower, so there should be little issue with these results in terms of in-verse impression. But there may be grievances with my assumptions or calculation mechanics, so feel free to voice those out.

All Pokemon which can learn this technique naturally (though technically even TM, breeding or Move Tutor methods should extend that possibility of calc application, I'm only going to argue this calc on the grounds of those who can actually learn this move from scratch) at least should be able to fall somewhere in that range. A list can be seen here.

Now this is something interesting.

Don't get this bit.

The volume of a cylinder is being applied to the volume of the lava flow from the magma reservoir underground to the surface above.

0.72 is half of the potential lava flow diameter, which I based off the body length of a natural Earth Power user (Camerupt), that is going to strike the battlefield. It clearly doesn't extend all that far in range amongst non-Legendaries, so I figured it was a fair amount.
Edit: Ninja'd

Thought that was some other value.

Now that you mentioned the Ampharos feat, there's another pretty similar one, for Lanturn.

Gold, LeafGreen and HeartGold Dex entries have this:

The light it emits is so bright that it can illuminate the sea's surface from a depth of over three miles.
Click to expand...

Eh... I kinda have to object to this one. No where in the attack description does it ever mention lava, and even in-game the attack is ground-typed whereas every other lava attack in Pokemon is fire-typed. Not to mention the fact that (as you noted) both the anime and the manga depict the attack as simply a generic burst of energy released from the ground.

So pretty much the only implication that lava is even involved is the animation sequence for the attack in-game, which for a calc I feel is pretty shaky ground
Spoiler:
pun intended

That being said, I'm sure that at least one character in some fiction has actually definitively done this (raised magma to the surface), so there's a good chance the calc will still be useful somewhere or other.
Look at the visuals, the description including "erupts with power" and even the name "Earth Power"

You cannot tell me that doesn't make lava the most likely possibility for the technique.

So sorry, but I am going to have to disagree with your sentiments on this.
Crystal of the Inhumans did something similar to this... I'll have to credit you for the method when I get around to it.